Writing About the History in Your Own Backyard Sometimes you can find the most amazing resources right in your own backyard. You just need to look.

As part of the lead-up to its Centennial Celebration, now underway in 2016, the U.S. National Park Service, in conjunction with the National Writing Project, has been collaborating with, and supporting, groups of educators to open up our eyes to some of the rich historical sites that dot our landscapes.

The National Park Service has oversight not only of the major national parks like Yosemite, the Great Smoky Mountains, Alaska’s Glacier Bay, etc., but also many American national monuments, and other preserves, battlefields, parkways, conservation areas and historical properties (the total number is astounding).

For us, in Western Massachusetts, the undiscovered resource we found as part of our partnership with the Park Service is one with deep cultural, political, technical and military roots. The Springfield Armory, one of only two armories in the nation for much of our country’s history, is set far back on the campus of Springfield College.

Step inside this National Historic Site, and you are immediately taken into the breathtaking world of munitions – of rifles and cannons and artillery – even an Organ of Muskets – and a rich historical view of how manufacturing innovation shaped the nation’s economic growth and immigration patterns.

A visit to the Springfield Armory also provides a stark reminder that military strength is a politically complicated and potentially controversial part of our historical narrative, but one that cannot be denied. Springfield Armory by Daderot (Own work) [CC0], via Wikimedia Commons

A summer program for MS teachers and students

Making that particular and controversial military story of our country visible to students became the nexus of a program for middle school students in the Springfield, Massachusetts area.

In partnership with the National Park Service and with support from the National Writing Project and with assistance from the Veteran’s Education Project, the Western Massachusetts Writing Project facilitated an immersive professional development program for Springfield educators that led to the launch of a four-day offering at the Springfield Armory that drew more than 20 middle schoolers, most of whom had never stepped inside their city’s historical museum before.

Over those four days in the 2015 summer program entitled “Make, Learn, Connect,” middle school students read, wrote, debated, explored, reflected, played, created, and shared ideas on the grounds of the Armory – all leading to a summer ’zine publishing project designed to capture what they had learned.

In the months afterwards, the organizers of the project came together to reflect on our own experiences, as part of our path to continuing the discovery of our nation’s treasures and as a way to plan for more avenues for bringing students into the National Park sites in our midst.

Every day of the project, students gathered together for whole group activities including a tour of the Armory, a discussion of the Butter Battle Book by local author Dr. Seuss, a presentation by local immigrant Joel Iranzi, an historical 3D map-making activity of the local community, and a mock assembly activity that made real the differences between individual production and assembly line production. Students also split into small groups to complete other activities that connected to other themes of the program: Immigration and Labor, and Rising Up. The format was engaging and effective at providing many different opportunities for learning, creating and building community.

Writing was woven throughout the week with students journaling into and out of the day, while also composing poetry, writing newspaper articles, making comics, and more. The session ended with students presenting their work and learning during a final day celebration.

The program was well received by students and families, and students left the program excited about local history, writing, and learning together. The range of activities and controversial topics that were offered ensured that every student was successful and engaged.

Students loved exploring the museum itself, watching a blank firing demo, and thinking about how the people working at the armory shaped the history of our country. The program was able to connect history to the present, making relevant universal themes of inquiry, while building student awareness of the valuable National Park that’s right in their backyard. 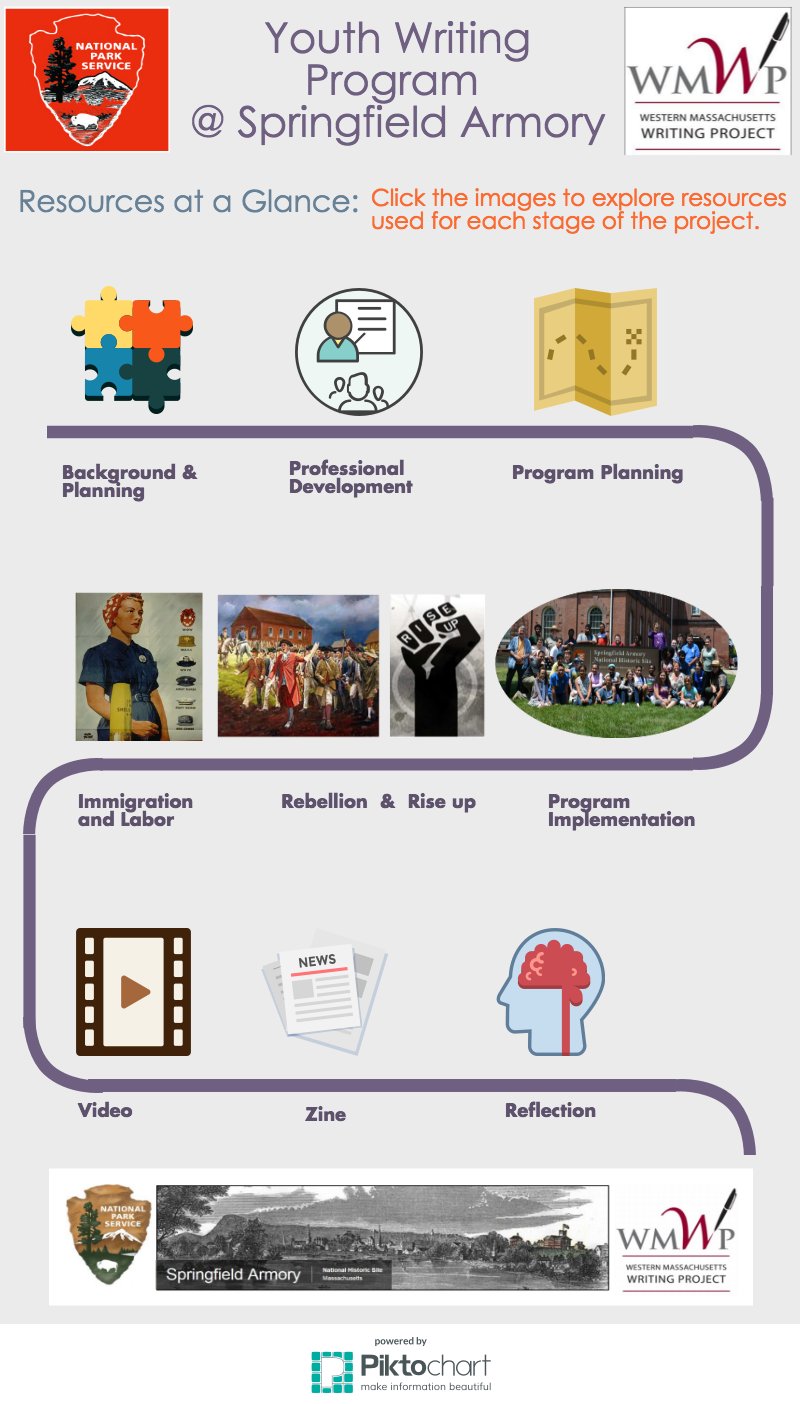 As part of the grant-funded program, the four educators leading the camp also participated in three mornings of teacher professional development with facilitators from WMWP, the Springfield Armory, and the Veterans Education Project, as well as other teachers who shared curricula integrating the Armory’s history and collection.

Through this process, teachers themselves learned about the Armory and the various ways that the institution has impacted history and helped shape the city of Springfield and the region. They also gained curricular ideas and information about the use of oral history and primary sources and developed the curriculum for the week’s program, which focused on two threads: rebellion and immigration/labor. During the summer workshop, the teachers met each day after the students departed to discuss the morning’s activities and prepare for the next day. On the final day, they completed a reflection on the project and considered next steps – both for the Armory program and for their own classrooms.

Among the take-aways they cited were excitement at the effectiveness of using primary sources to boost student engagement with literacy activities, and concrete teaching activities that could be used at school in the fall. There were also plenty of ideas for improvement such as extending the length of the camp, addressing logistical barriers such as transportation, and including more time for feedback on student writing.

Thus the Make, Learn, Connect workshop, while primarily an enrichment opportunity for students, also had an important professional development component for teachers, who developed skills, strategies, and understandings that will benefit students in their own classrooms for years to come.

For both students and educators, the week spent inside the Springfield Armory – learning about politics amidst the showcase guns and technological innovation – proved to be an inspirational first step in helping the National Park Service begin its own year-long celebration of the many national treasures scattered among the rural and urban landscapes of our country. As the Park Service notes in its catchy slogan for the year, go and “find your park.” You might be pleasantly surprised. Justin Eck has been an English Language Arts teacher, grades 6-12, in public schools for 12 years. He is in his 2nd year as a co-director of the Western Massachusetts Writing Project and is developing online courses while completing his final thesis project in the Learning, Media and Technology Program at the University of Massachusetts, Amherst.

Kevin Hodgson is a sixth grade teacher at the William E. Norris Elementary School in Southampton, Massachusetts, and the co-director for technology with the Western Massachusetts Writing Project.

Bruce Penniman is the Site Director of the Western Massachusetts Writing Project and a Lecturer in the English Department at the University of Massachusetts, Amherst.

Katie Richardson is a teacher-consultant with the Western Massachusetts Writing Project. She works as an elementary English Language Learner teacher and interpreter coordinator for the Amherst Regional School District in Amherst, Massachusetts.